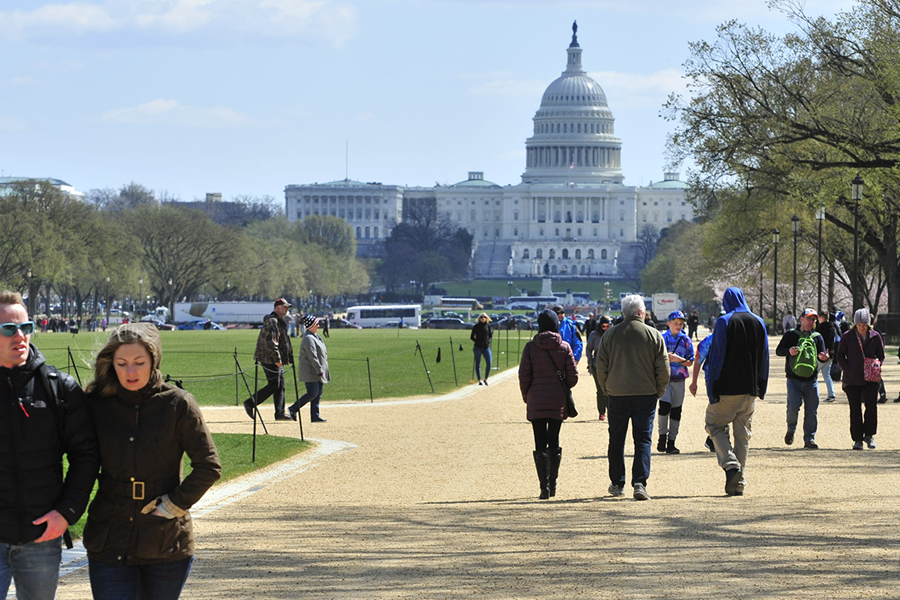 As expected due to the large numbers of early and mail-in votes this year, the 2020 election results are not yet available as of November 4, 2020. Votes are still being counted in several key states.

Consequently, the results of the presidential race and several Senate races cannot be determined. According to most reporting, it appears that Democrats are on track to hold onto a majority in the House of Representatives, although with a thinner margin.

Employee benefits will continue to be a significant issue for the next administration and Congress. Here, we take a look at what healthcare and retirement issues we will be following as Washington leadership continues to develop.

While the next president will have the opportunity to address regulations and enforcement at the federal agencies, any legislation will likely require compromise.

In the current Congress, legislation often moves through the House of Representatives but is not taken up in the Senate. Depending on the election results, this pattern could continue.

As we have seen with Presidents Obama and Trump, the next president may be forced to rely on executive orders, revised regulations and enforcement actions rather than legislative initiatives.

Regulations published by the Trump administration would likely not be subject to challenge under the Congressional Review Act if the Senate and House are controlled by different parties.

The coronavirus pandemic has resulted in uncertainty in employer-sponsored health plan costs this year. Plans saw expenses decline while employees and their families deferred elective treatment.

The 2021 Segal Health Plan Cost Trend Survey found that in 2020, reductions in health plan costs as a result of pandemic-related suspension of non-essential care more than offset the cost to test and treat patients for COVID-19. But those costs could come back in 2021, and deferred preventive services could result in adverse healthcare events for covered participants.

Congress mandated employers cover COVID-19 tests and vaccines at no cost. The next Congress and Administration could support requiring plans to cover treatment at no cost as well.

Lack of COBRA subsidy for employees and financial relief for employers

Congress failed to pass a COBRA subsidy to help employees finance continuation of coverage after layoffs or termination. It also failed to provide financial help to employers to help finance healthcare for COVID-19 treatment. Plan sponsors are likely to push for coronavirus relief assistance to help them provide healthcare coverage for workers in light of the impact of the pandemic on the economy.

Court challenge to the law’s constitutionality

As we consider health policy under the next administration, all eyes will be on the oral argument in the case of California v. Texas in the Supreme Court on November 10, 2020. The case will consider whether the ACA is constitutional in light of the fact that the individual mandate was effectively eliminated by Congress in 2017.

The Trump administration is arguing the entire law is unconstitutional. Several Democratic Attorneys General are defending the law, claiming that although the individual mandate was eliminated, the remaining parts of the law are intact.

During oral argument, the Justices are likely to ask questions about the “three-legged stool,” an analogy generally used to describe the ACA’s individual mandate, guaranteed issue rules and federal subsidies in exchanges to expand health insurance coverage. The Justices will consider whether removing the individual mandate eliminates just the mandate, one or more legs of the stool or the entire law.

Plan sponsors will be looking to see how the Court’s decision will affect the employer shared responsibility penalty and group health plan mandates, such as prohibition of preexisting conditions and covering adult children to age 26.

A decision will be made during this session, but could come as late as June 2021.

Enforcement of civil rights protections under the ACA

The Supreme Court also decided the Bostock v Clayton County case, which held that federal civil rights protections on the basis of sex include gender identity and sexual stereotyping. The next administration will be faced with issues concerning civil rights laws, including ACA Section 1557 nondiscrimination rules, and whether they prevent health plans from discriminating against employees who seek treatment for gender dysphoria.

Legislative efforts to change the ACA

While the Justices deliberate, Congress is likely to consider measures to modify the ACA, both in response to the lawsuit and to build on the ACA’s protections. If the House and Senate are controlled by different parties, legislation could pass the House but be stalled in the Senate. The use of executive orders and regulations may continue to be an important aspect of ACA implementation.

Moving forward, legislation could be introduced on a number of issues, including these:

The impact of these issues on employer-sponsored coverage is likely to be a subject of intense debate with these proposals.

In addition, while it has not been discussed in this campaign, we expect continued examination of the tax status of employer-provided health insurance coverage. The Excise Tax on High-Cost Plans (also known as the “Cadillac Tax”) is gone, but the issue of the tax status of health coverage is unlikely to disappear.

Echoes of Medicare for All

Although not all Democrats supported Medicare for All, the advocates for universal health coverage are part of a vocal caucus in Congress. Many legislators support expanding Medicare coverage to those age 60 and above. Others support permitting Medicare to negotiate the price of Part D drugs.

Medicare reform will have to be discussed in the background of the coronavirus pandemic. The COVID-19 public health emergency has resulted in increased stress on the Medicare Hospital Insurance Trust Fund (Part A), which is now projected to become insolvent by 2024.

Proposals to expand Medicare will have to be considered together with efforts to protect and sustain the program.

Other issues we are watching

Congress has debated changes to control the price of prescription drugs, including possibly modifying the Part D program.

Another topic has been preventing surprise billing by out-of-network providers, although there has been no agreement on how plans would have to pay those charges.

We may also see changes to HSAs to expand their availability and increased flexibility for flexible spending arrangements to carry over funds to 2021 that may not have been spent in 2020.

Congress may also recognize the new popularity of telemedicine and enact laws that would ease restrictions on providers who see patients through their phones or computers.

The Trump Administration has highlighted the concept of price transparency in healthcare, both by requiring hospitals to publish rates for the top 300 "shoppable" services, and by releasing just last week a final rule requiring employer-sponsored group health plans to disclose negotiated rates and out-of-network allowed amounts to plan participants. Group health plans also must provide certain payment rates to the general public. These rules are likely to face litigation and do not come into effect until 2022, but these transparency concepts are likely to continue under the next administration.

Existing coronavirus relief bills provide for reduced mandatory contributions and longer amortization of losses on a temporary basis. In general, this is a bipartisan issue.  However, the Democrats have not been willing to consider single-employer DB plan funding relief unless there is agreement on multiemployer reform.

Regardless of Administration, the PBGC has generally been opposed to changes that would weaken the long-term funding of single-employer plans, which would in turn increase PBGC’s liability if the plan terminated. Thus, while temporary relief is likely, more permanent relief remains unlikely.

Time is running out on dealing with multiemployer plan reform. The PBGC’s projected insolvency in 2026 may require an urgent compromise, especially if there are two more years of divided government.

The Democratic platform calls for reform of the bankruptcy laws to provide a higher status for workers’ claims for pay and benefits and plans’ claims for withdrawal liability. Higher priority for those claims means lower priority for banks and other creditors. If control of Congress is divided, such reform is unlikely.

The Democratic platform calls for revisions to the tax rules to level the tax benefit of savings to low income and higher income individuals. One way to do that would be to switch from a deduction for 401(k) and IRA savings to a credit.

The Democrats also would like to see any tax credits be refundable so that those who do not pay taxes receive cash or perhaps a contribution to an IRA or 401(k) plan equal to the credit. This type of change would be a major restructuring of the tax benefits for savings and would increase tax complexity.

The Republicans have shown an interest in increasing savings but it is not clear whether they would go along with this radical of a change. Republicans also have generally been opposed to refundable credits.

As the first bipartisan SECURE Act worked its way toward enactment (it passed in December 2019), Congressional staff were already talking about and accumulating bipartisan retirement savings provisions for a SECURE Act 2.0.

On October 27, 2020, House Ways and Means Committee Chairman Richard Neal and Ranking Member Kevin Brady introduced the Securing a Strong Retirement Act of 2020 (SSRA). Senator Rob Portman (R-Ohio), one of the leaders of retirement plan reform in the Senate, said last week that the Senate will hold hearings on its somewhat similar bill in the lame-duck session and hopes to have bipartisan and bicameral agreement in the next Congress.

SSRA has over 35 provisions aimed at encouraging retirement savings:

The Obama administration encouraged states to set up savings plans for employees of private employers in the State. The impact on national employers of different state rules has led to more support for a federal-payroll deduction savings opportunity.

One issue that has separated Democrats and Republicans has been whether employers should be required to make these plans available if they do not offer other retirement savings opportunities. With a split Congress, there would be resistance to a mandatory approach.

The Trump DOL has pushed to adopt regulations governing the role of plan fiduciaries before a potential change in the administration. It has already published a final rule on investments that require documented justification for considering economic, social, and governance (ESG) issues.

It also has proposed, with short 30-day comment periods that have already closed, a regulation on proxy voting and a regulation and prohibited transaction class exemption on the definition of an investment fiduciary.

This guidance reverses Obama administration approaches, and if former Vice President Biden wins the presidency, is likely to be a target for revised regulations and non-enforcement policies (where possible).

Let’s have a conversation

Concerned about the implications of the 2020 election for your organization? Get in touch.

HR, Employee Benefits and the 2020 Election

What might be the impact of the 2020 election on employee benefits and HR?

What We Know Now: Benefits and the 2020 Election

We continue to examine the impact of the election on employee benefit plans and workers in 2020 and beyond.

Read the latest edition of our annual survey on medical and prescription cost trends for health plan sponsors.